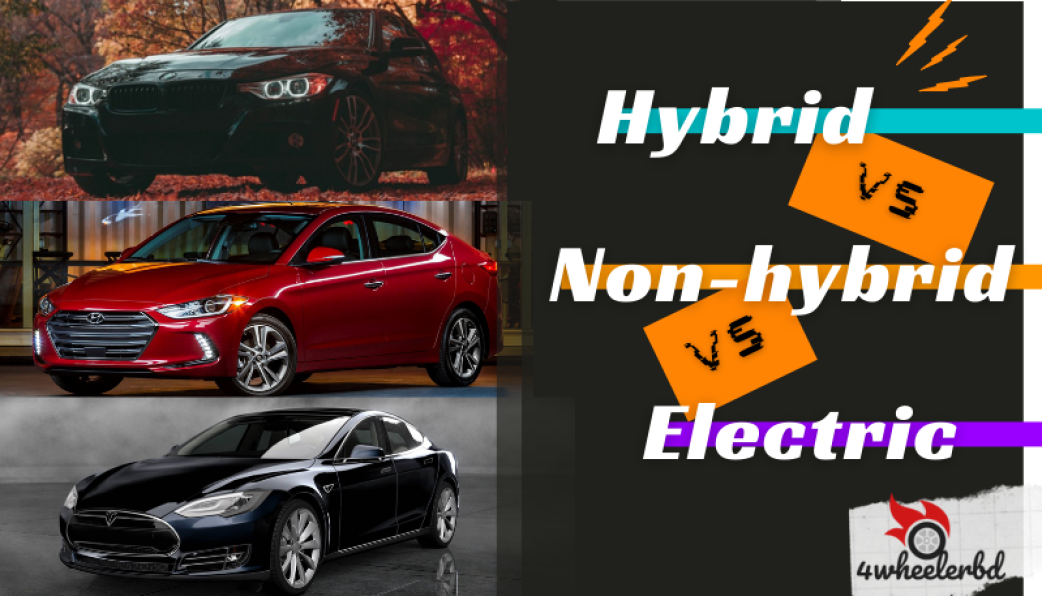 In this article, we will discuss about the differences between Hybrid, Non-hybrid and Electric cars. We get to see many types of cars on the road. But whats are the facts that make them different? Let’s chase to the point:

What is a Hybrid car?

Hybrid cars are powered by 2 engines, one is a traditional fuel engine another one is an electric engine both work with each other providing proper power to the wheels. On the hybrid, you can send power to the engine solely by the engine, or solely by the motor. The gasoline-fueled engine doesn’t rely on the electric engine. In order to save fuel, electric power the car in order to delay the use of the gasoline engine and save fuelThe motor’s batteries are charged up by a combination of the petrol engine and regenerative braking. The hybrid cars offer decent economy and emissions. The basic principle with hybrid vehicles is that the different motors work better at different speeds.

What is a Non-Hybrid car?

A traditionally powered vehicle uses only a gasoline or diesel engine. On a non-hybrid car, the engine is powered by only one power source. Regular petrol vehicles have higher emissions than the hybrids and electric cars. In the non-hybrid car, the motor controls the vehicle at all times with power being supplied either by the battery or a power generator that is run by the engine.

What is an Electric car?

Electric cars run fully on electric power. These cars are built with enough battery power that can deliver adequate range and performance without the need to include an engine or gas tank at all. It only runs by using energy stored in batteries.  Purely electric vehicles are becoming more and more popular, thanks to innovation from relatively new companies. Electric vehicles pollute lower emissions compared to other non-electric vehicles.

If you are to buy a car you have to know about these facts. Choose which will be the best choice for you.